World title rematch in Saudi Arabia, due 9pm GMTToo many heads remain in the sand with hosting of sportAnd you can email Tom or tweet him @tom_lutz 9.06pm GMT Joshua is first out as the challenger in a white robe. No entourage for the Briton... 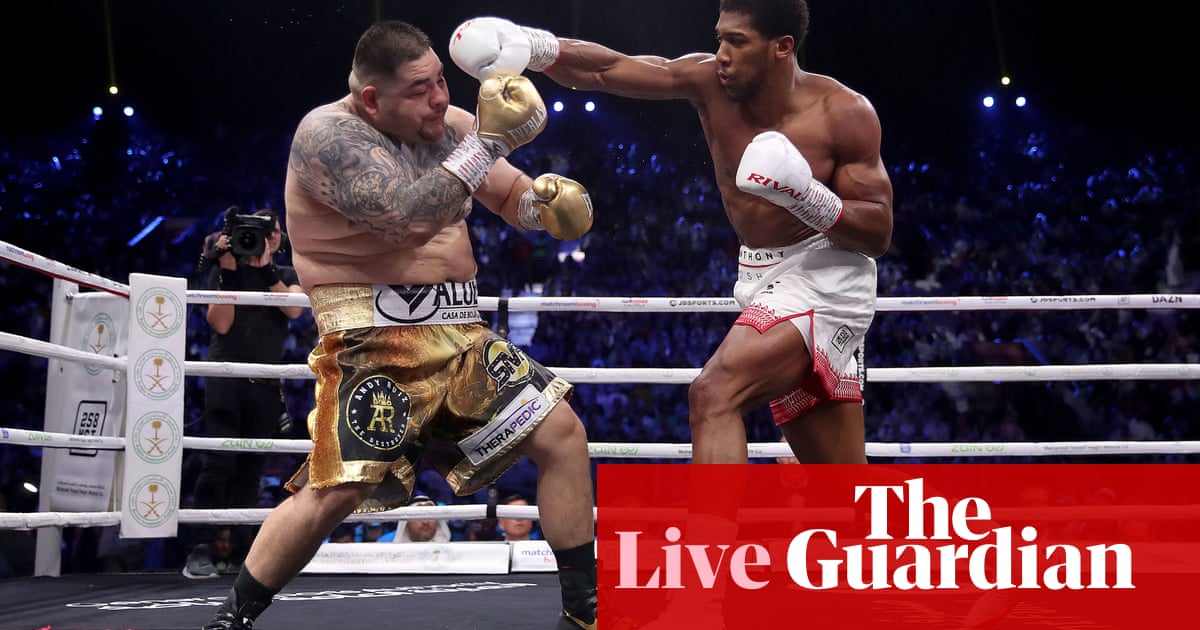 Joshua is first out as the challenger in a white robe. No entourage for the Briton - he strolls in on his own like it’s his day off. Maybe an early sign to the audience that tonight is about the fight, and not the sideshow - a criticism levelled at him after the last fight.

The elephant in the room, of course, is the setting of tonight’s event. Tonight’s card is taking place amid mounting criticism from Amnesty International that taking around $80m from a kingdom that has an “abysmal” human rights record, including jailing and executing opponents, is morally bankrupt. (And that’s putting aside the four fighters on the card with a history of testing positive for performance-enhancing drugs.)

Felix Jakens, Amnesty International UK’s head of campaigns, made his organisation’s feelings on the fight - and its venue – clear. “The fight is pure sportswashing and that’s why it’s so important to challenge the Saudi propaganda machine and its increased use of sport to gloss over its abysmal human rights record,” he said.

“Not necessarily,” Joshua said. “I just came here for the boxing opportunity. I look around and everyone seems pretty happy and chilled. I’ve not seen anyone in a negative light out here, everyone seems to be having a good time.”

Joshua also appeared to not know what Amnesty International was when told the human rights organisation wanted him to research and speak out about problems in the country.

Anthony Joshua vs Andy Ruiz: How much does pay-per-view cost in UK?

Spanish election: deadlock remains with no clear majority in sight

Ukraine to review legal cases amid Trump claims over Bidens

White House acknowledges use of separate system to store...

Administration did direct key documents to be filed in a separate classified system,...

President tells LSU players: 'We took out those terrorists like your football team...

Trump Says “US Will Not Leave” Iraq Unless Billions For...

"We have a very extraordinarily expensive air base that’s there."

Follow all the live action from the King Abdullah Sports City

Colin Kaepernick remains a sad reminder of the perils of...

It is tempting to spin this private workout as a chance to finally break free. But...

Scott's position on this proves everything I've been saying for two months…  This...

Street Artist Sabo Speaks Out About PayPal Banning Him,...

“Today PayPal canceled my account with all of my money in it.”

Express POLL: Was Boris right to sack 21 Tory rebels for...

BORIS JOHNSON has sensationally sacked 21 Tory rebels after they defied the Prime...